Mastitis is the inflammation of the mammary gland and udder tissue.

It usually occurs as an immune response to bacterial invasion of the teat canal by a variety of bacterial sources present on the farm (commonly through bedding or contaminated teat dips), and can also occur as a result of chemical, mechanical, or thermal injury to the cow's udder.

Mastitis is a multifactorial disease, closely related to the production system and environment that cows are kept in. Mastitis risk factors or disease determinants can be classified into three groups: host, pathogen and environmental determinants. You can easily Detect Mastitis in Cows with the help of specialist doctors. 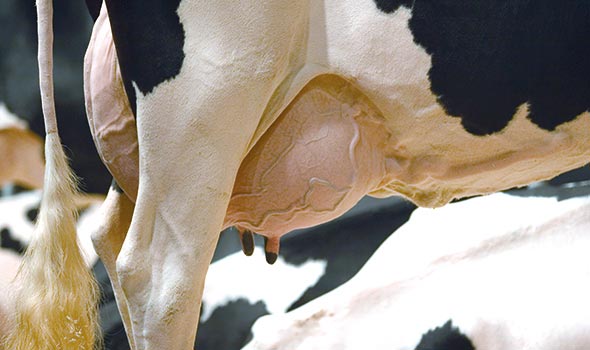 Subclinical: Few symptoms of subclinical mastitis appear, although it is present in most dairy herds.

Somatic cell counts measure milk quality and can be used as an indicator of mastitis prevalence.

Milk takes on a watery appearance, flakes, clots or pus is often present.

A reduction in milk yields, increases in body temperature, lack of appetite, and a reduction in mobility due to the pain of a swollen udder are also common signs.

NSAID are widely used for the treatment of acute mastitis. Aspirin, flunixin meglumine, flurbiprofen, carprofen, ibuprofen, and ketoprofen have been studied as treatments for experimental coliform mastitis or endotoxin-induced mastitis. Orally administered aspirin should be used with caution in acute coliform mastitis because it may lead to severe rumen atony.